You are here:
Service 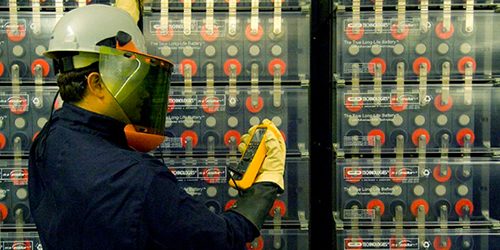 Having a backup battery – or better a system of backup batteries – ensures that in the case of a power outage, you are safe and can still function for a time. Facilities like data centers, airports, hospitals, oil and gas facilities, railways, and standard utilities and applies aren’t able to function properly without having backup power assurance. Backup batteries are also necessary for manu-facturing and commercial buildings as well since alarms, controls, emergency systems and more need electricity too.

Because power plays such a crucial role, backup batteries are in place. But when you look at these batteries, they are usually more upscale than the ones at home. Most businesses will have backup power stored in uninterruptible power supplies (UPS) as well as a string of batteries to ensure everything can run smoothly.

The beauty of the UPS batteries is the fact that once they’re installed, you’re good to go. However, that doesn’t necessarily mean you’re free from maintaining these batteries entirely. They are still susceptible to deterioration due to corrosion, internal shorts, dry-out, seal failure, and sulphation.

To ensure that backup battery system is fully functional and can perform in the even of a power outage, here are some things you want to do to maintain them.

Caution!
Any interaction with your Backup Battery System can be dangerous, and should be only be performed by a qualified electrician or battery service technician. If your system requires service, Battery Electric has a full team who can perform on-site maintenance.
Battery Electric Service

Maintaining batteries like these is quite easy and boils down to a series of tests you’ll want to perform. The first test to do is the internal battery resistance test. The whole purpose of this test is to determine the life-span of the battery. It is not a test on the capacity of the battery.

Battery life-span (or battery resistance) is meant to stay relatively flat up until the end of the battery’s life is getting to the end. By that point, the internal resistance will be going up while battery capacity drops.

When you are performing this test, you’ll be tracking those values and will be able to identify when the battery is getting too old and needs to be replaced.

In order to perform this test, you’ll need a battery analyzing tool that’s built for testing stationary batteries to measure the battery resistance. By using the tool, you’ll want to be reading both the voltage drop as well as the AC impedance. Both of the results will have ohmic values.

Also note that conducting this test only once isn’t enough. A single resistance value isn’t much data to make a determination. With this in mind, you want to be conducting this test once per day or two and measure the values over months or even years. Once you have that, you’ll want to create a baseline and compare the results to previous values.

If that test sounds too cumbersome for you, we understand. An alternative to that test is by performing a discharge test. It is by far the ultimate way to discover the true available capacity of a battery. The only snag is this is difficult to perform as well.

When doing this test, a battery is connected to a load and is then discharged for a period of time. During this time, the current is regulated and constant known current is drawn while the voltage is measured. Details such as the capacity (in ampere hours), discharge current, and how long you need to test are all outlined in the manufacturers specifications.

But the complicated issue with this test is the fact that the battery can’t support critical power while in the middle of a discharge test. This means that any critical loads will need to be pushed to a different battery bank during the test and even several hours after performing this test.

On top of that, since you are discharging a large battery, it’ll release a significant amount of energy in the form of heat.

In terms of the results of the test, a healthy battery will maintain a capacity above 90% of the manufacturer’s rating. When it drops below 80%, most manufacturers will advise you to replace the battery. Some other things to note when doing this test is to look for:

While those two methods above are great, you can look at some other standard battery tests. Here are some instructions for conducting each test.

When doing this test, first isolate the battery or batteries from the charging system. Next you’ll want to measure the individual cell voltage or string using a digital multimeter or battery analyzer. Perform this once per month.

Measure the output voltage which you can measure with a battery analyzer. You want to do this once per month. You’ll also want to observe the output current that’s shown on the charger on a monthly basis so record this data.

Using a battery analyzer, you can measure these values once every quarter. You’ll want to record these values as it’ll help you to establish reference for where batteries should be at.

While these batteries don’t require much maintenance, these tests can ensure that if something bad happens, you can fix it quickly. By not performing these monthly maintenance items, you can risk stalled business, loss of power, or even building damage if it gets that bad. Make sure you are checking these batteries on a regular basis and maintain them through these tests.

Onsite Industrial Battery Back Up Installation and Service
April 8, 2022

Whatever your power needs, Battery Electric has a practical solution to keep your business moving!
March 11, 2022

The Benefits of a Family Owned Business – Quality is Personal
February 11, 2022